When the Earth Gets Slapped 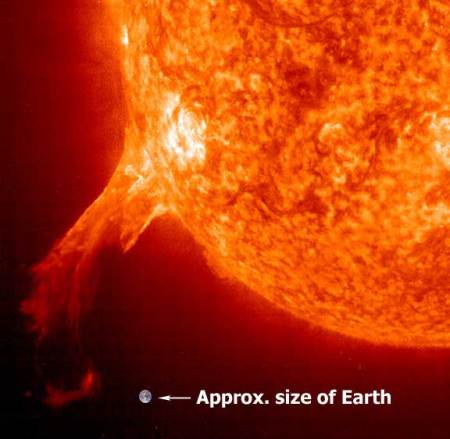 If you have ever been slapped you have noticed that it only hurts where you have been hit the other parts of your body feel fine except maybe your ego.

Solar flares and “Coronal Mass Ejections” are a part of our Sun’s existence it’s what it does. It’s nothing personal. There are 11 year cycles where our Sun goes through a period that it is reasonably peaceful and at other periods is extremely violent.

Our little Earth orbits the massive Sun at about 67,000 miles an hour and we are 93,000,000 miles away from it.  Usually it takes 3 to 4 days for a Coronal Mass Ejection to collide with our Earth’s orbiting path.

What is the difference between a solar flare, solar wind and a Coronal Mass Ejection?

The surface of the Sun does not radiate uniformly over it’s surface. Rather the surface is turbulant and violent; more like a furious storm of supper heated plasma, with pockets thousands of degrees different in temperature. Picture in your mind sitting at your fireplace with a roaring fire and feeling the waves of heat coming from the fire.

Well constantly the Sun is emitting charged particles with it’s radiation; where these particles concentrate is called a solar wind.  Now imagine looking at the flames leaping from the logs, well just like the flames,  solar flares are localized explosions on the Sun where hot plasma will get shot out from the Sun. Now imagine while you sit at the fire and somewhere within the burning wood there is a loud bang and a piece of flaming wood and charcoal come flying out of the fire-place at you!  Well with the Sun when mammoth mountains of the solar surface is thrown out into space, that would be a Coronal Mass Ejection. The video below is the SOHO satellite’s images of the Sun’s surface for the last 48 hours where you can detect the differences between solar wind, solar flare and a coronal mass ejection. (The solar disk is blocked simulating an eclipse to facilitate viewing)

Do Sun spots have anything to do with solar flares and coronal mass ejections?  Sun spots occasionally are the cause of solar flares but they are definitely the cause of coronal mass ejections!  Because, unlike the Earth,  the magnetic poles of the Sun are in constant motion and the massive electromagnetic fields create whirlpools, vortexes in the plasma that may extend miles below the Sun’s surface (picture in your mind a sling shot being pulled all the way back).  This vortex or whirlpool in the plasma is that sun spot. Then, in an instant, the magnetic fields shift and then the slingshot is released!

A sun spot is the barrel of a gargantuan plasma cannon!

Millions of tons of super heated plasma from below the Sun’s surface is shot from the Sun at over 2 million miles an hour! If we are in its path it will not be a good thing. 🙂

The Earth is always hit with solar wind and solar flares but a Coronal Mass Ejection is a whole other thing! 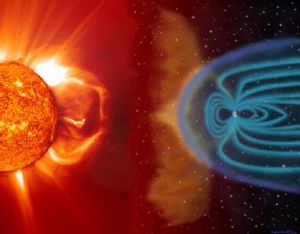 This image show the first moments of the Sun slapping the Earth with a Coronal Mass Ejection.  The faint blue line represents the ionosphere while the turquoise lines represent the earth’s magnetic field that supports the Ionosphere. Depending on the force and mass of the Coronal Mass Ejection the ionosphere and magnetic fields will buckle and bend compressing the Ionosphere closer to earth.  Now we have to stop and think about something.  Why are the contact poles on your car battery the distance they are, why are they not closer?  Because the electricity in the battery will arc if they are closer. Okay, now lets look at this situation as the Coronal Mass Ejection which is superheated and supercharged electrically to the tune of trillions of volts negative; strikes our Earth which is electrically positive it compresses the Ionosphere shortening the distance between the Coronal Mass Ejection (extremely negative) and the Earth (positive) until ARC !  Can this be seen?  No, but the effects will be everywhere!  Why can’t it be seen?  Because the air of the atmosphere  you are breathing is the conductive material!  What will it feel like?  Some say it’s like ants crawling on your skin, others say it’s like wearing a wool sweater, while others notice nothing at all!  What are the effects? Depending on the dispersal field and the mass of the coronal ejection; everything that conducts electricity will have had thousands of volts pass through it!

Will this be the end of the earth?  NO!

Just the end of anything electrical for that city, state or country on Earth that was facing the Coronal Mass Ejection when it hit.

The biggest recorded Coronal Mass Ejection hitting the Earth was September 1st through 2nd 1859  at the speed of over 5.2 million miles an hour.  The coronal mass had traveled 93,000,000 miles in 17 hours and 40 min.  The bombardment continued as the Earth rotated so that Europe and the United States had every telegraph line ( it was the only electrical appliance at the time) shorted out or melted causing fires everywhere.  The Aurora Borealis filled the night sky as  far south as Rome, Havana and Hawaii.

(There have been Coronal Mass Ejections 100 times more powerful recorded but they did not hit Earth.)

The second biggest Coronal Mass Ejection to hit Earth was on May 15th 1921 which started also in Europe and finished in California.  All Telegraph wires and everything connected to them became fried or burnt.  Aurora Borealis was reported in Mexico and Cuba.

The third one and smallest of the three was in March 1989.  You can probably guess which city was facing the Sun when the Coronal Mass hit and melted the main transformer at Hydro-Quebec (Canada) causing the power grid to go down for over nine hours.

Back in March 2009  NASA-funded a study by the National Academy of Sciences entitled “Severe Space Weather Events-Understanding Societal and Economic Impacts” that you can buy for $31.00.  The premiss of the book evaluates total damage directly and collateral from a Coronal Mass Ejection hitting the United States of the same magnitude of the 1859 event or the 1921 event.  How far in detail does it go? It even tells you how long your toilet will be inoperable!  For a quick review of the report click here.

Ever wanted to go back to the days of  the novel “Gone With the Wind” or the days of Sherlock Holmes?  Well when these events happen again, you’re there, back before the time of electricity!

Will your computer work?  Not until power has come back on (which will be many months later). But when it does, if you didn’t have a good UPS that gave up its life “taking the bullet” to protect your computer all the insides of the computer will be charcoal!  Was your computer backup device plugged into the electricity when the Coronal Mass hit?  Then it too is toast!

Remember BACK UP YOUR DRIVES then LOCK UP THE BACKUP!

This is a good idea whether we get slapped by the sun or not and it saves our ego from being hurt! 🙂

Life is the gift, electricity is only the gift wrapping and bow.